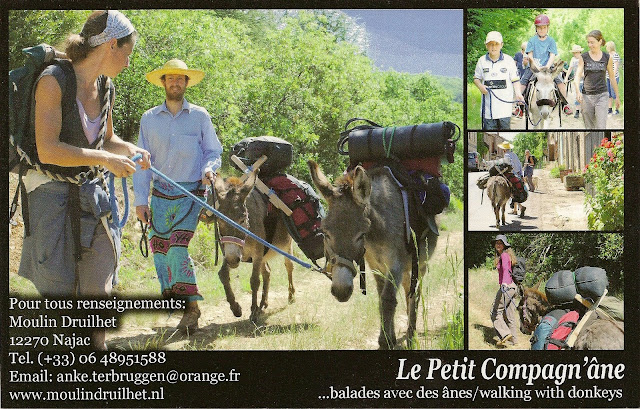 Spend a day, or half a day, from Verfeil walking with these lovely animals. Small children may ride.
Posted by bergerie at 12:48

Make a note in your diary for the choral concerts below to be given by a choir from Sheffield plus  string quartet and keyboard. All the concerts are in beautiful locations.

Many thanks to those of you who replied to the query about the clock maker in Caylus. It appears that M Viguier is very good and can be found close to the old Chateau  (after Draw International). Should you want to contact him the number is 0563 304751.
Posted by bergerie at 12:16

La Chataigneraie at Lagarde Viaur opens on the first of July till 12th of September. For anyone who has not been it is a must for summer days or balmy evenings. It serves crepes, galettes, salads, ice creams  and regional products all in a superb setting by a river with swimming facilities. Our grandchildren have this noted as a place to visit each holiday and it has always been relaxed and good value. In the evenings Raul De Souza on trombone  and Eric Lagarrigue on guitar play Jazz as you eat in an ' ambiance musicale'
Reservations can be made on 05 65 81 41 74  although we have never reserved just arrived.
Direction from Laguepie to  St. Andre de Najac then Lagarde Viaur.
Posted by bergerie at 12:11

Does any one have info. on the clock shop at Caylus. Has any one taken clocks there? or know the opening times etc. Info. to Val at mail@bromlea.com
Posted by bergerie at 20:53

Relative newcomer to the area Sue Gray Smith has started a small business called 'Celestial Delights' making delicous home -made cakes for all occasions.We have sampled 'devils chocolate food cake', walnut and coffee and a delicious fruit slice but many more varieties are on offer. Sue used to bake cakes in England on a semi commercial basis and says one of her real hits with children are the ice cream cakes which she is happy to spend time making with a group of children. Does this give you ideas for passing a morning with visiting Grandchildren?
Sue lives at Puylaroque and can be contacted on tel. 0563 26 34 23, mobile 0787005550 or by email Suegray36@hotmail.com
Posted by bergerie at 20:50

Dear Friends
After four years of cycling up mountains for different charities, this was my last one for the foreseeable future, I believe I have used up the generosity of my kind sponsors, doing the same old thing. I will continue riding up mountains, but just for pleasure.
We arrived at our hotel in Ax les Thermes at 1130 Thursday morning, 9 June. We drove up the mountain to have a look at it, came down and had lunch. I decided to ride it that afternoon as rain was forecast for Friday. I had got my weight down to 10 stone 13 and had trained well. I set off from our hotel at 1345 and arrived at the summit of Le Col de Pailheres, 2,001m/6,565 feet above sea-level, at 1526. I covered the 19.65 kms in 1 hour 41mins 42 secs, at an average speed of 11.6 kms per hour and climbed 1,281m/4,203 feet. It began quite steeply from the hotel, there was a tough middle section and it gradually got harder. The last 5 kms was in thick, low cloud and the gradient of the last 4 kms was 10%, 9.4%, 8.5% and 10.4%, definitely my hardest mountain ride to-date. 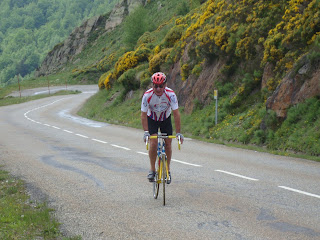 Many thanks to my Support Team Manager, Linda, for her patience and support, she was rewarded with an afternoon in the thermal spar baths, jacuzzi, steam room and sauna.
In my four years of charity mountain cycle rides I have raised over 5,000 Euros for British and French charities and my final ride is for an international charity that my friend, , works for called Village Focus International. She is a very brave girl and I am honoured to be raising money for her charity.
Many, many thanks to all my kind sponsors over the years and to everyone who has given this year. If you have not sponsored me yet, this year, there is still time, please send your donations to me at Pourramond, 82220 Auty France and they will be forwarded to Talia.
Thank you,
Martin.
Posted by bergerie at 17:29 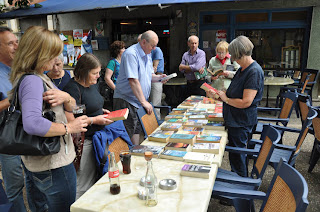 Around 15 people and plenty of books to choose from at the first book swap. At the Gazpacho at St. Antonin Tuesday 7th of June.It is hoped to repeat the event in a couple of months time and to keep it going through the winter months.
Posted by bergerie at 13:47

Where to go and what to see in and around Caylus

The Caylus.com website carries the weekly publication "Voulez-Vous Sortir", which gives year round details of what's on in the coming week for a good distance around Caylus itself.  Local shops have copies too, but these are often taken quite quickly.
The link is: www.caylus.com/fr/vacances-a-caylus/voulez-vous-sortir.html.   Click on one of the two file formats - PDF file or Word document.  With the latter, it should be possible to highlight events that catch your eye before you print - something you can't normally do in the PDF alternative.
"Voulez-Vous Sortir" is updated by the local Office du Tourisme every Thursday lunchtime with details for the following 7 days.
Hope this is useful.
Chris Robinson
Posted by bergerie at 13:18

Beatles in Caylus
Admired by many of a certain age, the local Beatles tribute band, Sgt Peppers, are coming to Caylus next Saturday, 11th June.  The "fab five" (it seemingly takes more than four to re-create the Beatles' sound) take the stage from 10pm to midnight, Place du Lavoir, entry €5. Give your ears a treat!
Chris Robinson
Posted by bergerie at 13:16

New residents and some useful tips

A warm welcome to newcomers to St. Antonin, Glen and Kathleen Bloomfield. They have bought 'Paradis' the former home of Dr Ivor and Di Coleman and are now here full time.
Kathleen has some tips which she found useful and passes them on to other new residents.

The main  CPAM office (the French Health Department) for T&G residents is in Montauban.  However, a representative from CPAM visits St Antonin Noble Val each Tuesday morning between 9.30am and 11.30am and will handle registration and also claims or any queries.  The representative can be found in an office in the centre ville next to the tax office (which is just down from the Mairie}. (Newcomers in Tarn and Aveyron departments will find their CPAM offices in Albi and Rodez respectively, with "permanences" in other local towns.)
Access to the municipal dump (dechetterie) is provided free of charge to residents of the communities in Quercy Rouergue and the Gorges de L’Aveyron.  It is very useful for disposing of rubbish which is too large for local bin collections or for large items for recycling.  The dechetterie is located on the D958 just outside Lexos (inside the old Lafarge cement works) on the way to Varen and can be used for cardboard, wood, building rubble, old furniture, old electrical items such as fridges, cookers etc and anything metal.  There are also facilities for batteries (small and large), engine oil and garden rubbish.
You must be registered to use the facilities; however, this is easy to do.  The first time you go, take the notaire’s attestation or proof of payment of Taxe Fonciere or d’Habitation to prove you are a local resident and carte grise of the vehicle to be used, and the man in charge will take a note of your details and issue you with a green card (carte verte) and an information leaflet.  Each time you visit, stop at the gate, present your carte verte and you will be shown to the appropriate area.  If you are lucky, the man in charge will assist you with unloading and sorting.
The dechetterie is open on Wednesdays and Fridays (9am to 12 noon and 1pm to 5pm) and on Saturdays (2pm to 5.30pm) except for public holidays. A second dechetterie is available to locals in Parisot.
(Again those of you in the Tarn or Aveyron depts need to apply to your mairie for details of dechetteries in your area).
Posted by bergerie at 17:27

TAGlines is for you to tell us, your friends and other interested readers about what's going on in the area; what is for sale or wanted; and the more readers we have the better the chance of getting the word out.
TAG( Taglines) est un blog mis à votre disposition pour que vous partagiez avec nous, les lecteurs de Tag, (qui sont principalement Anglais pour le moment et vivant dans le Midi-Pyrénnées,) ce qui se passe dans la région, ce qui se vend, ce qui est cherché, ce que vous faites et pensez.
NB some email services have strict spam/junk filters and TAGlines doesn't always get through, but you can add it to your "white list" and make sure it gets through.
If you want a closer view of the pictures, click to see a bigger image.

bergerie
I have had a life with books. Moving from Middlesbrough to Manchester Public Library then Bolton, where I ran a Branch Library. My interest has always been children's and illustrated classic literature so when I started my bookselling career, this is what I decided to specialise in.I think my background in Libraries and the knowledge I gained there set me on the path to becoming a very successful bookseller and I gained first membership of the PBFA [Provincial Booksellers Assoc.] and then a couple of years later was admitted to the prestigious ABA [Antiquarian Booksellers Assoc.] Having the courage to exhibit at Book Fairs in the USA made a huge difference. We moved to France in 2001 and have never regretted that decision

Theatre in English in Cordes

The Anglican Chaplaincy of Midi Pyrenees and Aude

Your picture could appear here and be seen by hundreds of readers per day.
No charge but it must be in a shape suitable for here and must feature the SW of France.
Click on the picture to view the artists website , if they have one.

Cherry blossom in the Tarn

A Traveller's Dream by Elly Wright

On the road, Africa by Resi van Eeten

When the boats come in by Rana J. Rodger

All words are pictures or "twindividual art"

by Milla and Mollis Schulze Elshoff

It's a tall order