Vive la Difference  by Alison Croft
We migrated from Australia to retire to France about three years ago.
We now live in a very small village of about 150 inhabitants near
Laguepie. We have found it interesting to compare life in the French
countryside with living in a village, called Toodyay, in the
Australian bush in Western Australia. There are some similarities but
a lot of differences – the most important difference is our
relationship with the local Maire. In Toodyay, we never met nor saw
the Shire CEO but his councillors were to be seen conspiring in the
local cafe on Saturday mornings. Here, in France, the Mairie is
opposite our house and the Maire is directly involved in all aspects
of village life.
One similarity is that both villages have a river running through. In
Toodyay, the river is called the Avon and there is an annual Avon
descent in the winter where canoeists from around the world
participate in shooting the rapids and skirting the mudbanks. Near our
village, there is a swimming area and the Aveyron river flows with
water all the year.
One major difference is that the social life in Toodyay centres around
three pubs, where the local labourers and 'cockies' (farmers) meet and
drink. Flinging snakes at one's friends seems to bring an extra
comradeship there! And of course there are the weekend 'barbies' where
everyone brings a dish and lots of beer, and wear shorts, T-shirts and
thongs (flip-flops). In the French village the social centre is
definitely the 'salle des fetes' where well-dressed and elegant people
of all ages attend the 'the dansants', wedding receptions and birthday
parties.
The other significant difference is the involvement of the Maire in
supporting and caring for the villagers. He is very popular in the
village and often there are tractors and cars stopped alongside him
when he is cleaning the local noticeboards. The Maire ensured that
all the villagers could manage when we had a 2–day power cut 2 years
ago by personally visiting the houses. He takes a dustpan and brush to
clear up broken glass lying in the road after a minor crash. He
officiates at weddings at the Mairie. He drove to Albi, one Friday
afternoon for a new modem to replace our defunct one to ensure we had
a functional phone and internet line when my husband was incapacitated
and I had to go to a funeral in England. He also arranged for a
telecom engineer to install the modem.
We love village life in France and prefer it for all these reasons but
also because of the lack of insects! Hardly any flies in spring and
summer (no fly screens obscuring our views), a few tiny spiders and no
snakes. In Toodyay, we had 'blowies' (big shiny flies) in November,
mud wasps nesting in the mud bricks of our cottage in December, ants
varying in size between tiny to 'soldier ants' of 2 cms length that
bite, and big hairy 'huntsmen' in the hot summer months.
Vive la Difference!!
Posted by bergerie at 22:10

Advice from the Gendarmerie

Although we are very lucky in this region not suffering too much crime one still has to be on ones guard and take sensible precautions. An absolute give away to thieves is leaving gates or garage doors open when 'just nipping out'. So close those gates if there is nobody left in the house. A friend can testify to the need of this advice and although the burglar did not end up stealing things he did make a terrible mess of the house. The gendarmes visiting the scene were adamant that the opportunist  thief would have recognised this signal.
Posted by bergerie at 18:01

Changing the clocks to summer time [wonder what they call it in French?] Sunday 27th of March heralded the arrival of our first cuckoo. Within the week we expect our first cry of the colourful Hoopoe. Swallows have also been spotted in Varen - yes it is official  Spring is here.
Posted by bergerie at 17:49

If you are enthused by the natural world of our region, the variety of wild orchids cannot fail to excite interest.
More than 50 varieties - excluding many hybrids - exist in Tarn and Garonne alone. And this is the season when they start to appear.
Often at first sight they seem just like any other wild flower - pretty, but unexceptional. But take a close up view and see just how different  and beautiful they can be.
They grow in many different landscapes, but on your country walks look out for them and if you have a camera take a close up. But don't pick them. Some are protected, but all need to be left to amaze the next person along.

For a comprehensive list and identification aid look at Lilliane Pessotto's web site at http://www.premiumorange.com/orchidees-papillons-82/ - not only orchids, but butterflies and other flowers as well. 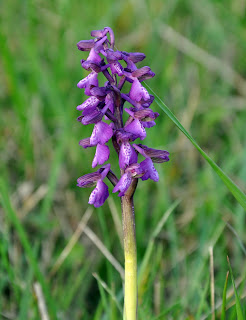 Orchis male - Early purple orchid seen 19/3/2011
A readers comment   The photo actually shows the Green-winged orchid, Orchis morio, which is the most common orchid in the area at that time in March.
Michael Fontes
Posted by bergerie at 22:08

For more information please contact: anke.terbruggen@orange.fr
Posted by bergerie at 17:00

TAGlines could be back

Do you remember TAGlines? Conceived as a means of keeping English speakers in the "golden triangle" where Tarn, Aveyron and Tarn & Garonne departments meet - around the lovely medieval villages of St Antonin Noble Val, Varen and Najac it was published quarterly from 2003 - 2005, growing from four A4 pages to twice that size.
Given away free around the area it was supported by local advertising and a few generous donations.
The editorial concentrated on local events and personalities, but with the emphasis firmly on our hosts the French population (and indeed many of them were pleased to read something  in English of interest to the area).

The publisher, Val Johnstone of Varen, would like to re-establish TAGlines, but via the electronic media and first steps are  to establish an on-line blog version. So if you have news, views, items for sale, events to publicise etc why not let TAG on-line know  at taglines82@gmail.com
Posted by bergerie at 17:07

Having read an article in The Telegraph on good places to eat in Toulouse [ written by a French chef in London] we made a rendezvous for lunch at  'Lebonvivre' on Place Wilson. Totally unprepossessing the small restaurant looked nothing special but the food belied its looks. It does not do 'menu du jour' but we had a splendid meal for 30 euros including wine and coffee. A family owned restaurant with excellent service and lovely atmosphere. Apart from the food it appealed to me as it had 'bandes dessinees' [cartoon books] along a ledge as decoration. A reservation would be wise  Lebonvivre.com   15 bis, Place Wilson. Toulouse  Tel 0561 23 07 17
Posted by bergerie at 16:11

The winner of the French Masterclass 2010 Anne Alassane lives with her family at Montauban and has opened a 'ferme Auberge' called Pays'Anne. The restaurant uses produce grown on the family farm which has cows,goats,poultry on ten hectares along with a vegetable patch. Winning the dream has enabled her to set up and open  the restaurant as prize money was  100.000.euros
A group of  us  managed to get a booking, no easy task as she is booked up quite solidly for the peak times. We decided on her lunchtime menu of 25 euros which included 3 courses including wine and coffee. A thoroughly enjoyable meal was partaken  with comments on the unusual flavours and good presentation. It was a very leisurely meal which was fine but  she may need to think of comfier chairs  in the future [ take a cushion] Around the restaurant are reminders of her TV success, photographs, her Masterchef pinny and a Masterchef Cook book.
Pays'Anne can be found on 745 Route du Fau 82000 Montauban; tel 0687391772. Open every day except Wed. and Thurs.Reservations needed. www.bienvenue-a-la-ferme.com/tarn-et-garonne/ferme-la-pays-anne-133523

Dog Friendly Hotel in Spain
At the heart of the Costa Brava we found a delightful small family run  hotel which although smart and stylish still allowed us to take our dogs.The Hotel Llevant at Llafranc was the perfect place for a break with a sea view balcony which our golden retriever adored, lovely meals and friendly service. The dogs we are pleased to say were not allowed in the restaurant but after a day walking along the wonderful cliff path they were happy to fall asleep in the room.
Restaurant Hotel Bar Llevant Costa Brava, Girona .www.hotel-llevant.com. info@hotel-llevant.com
Any other suggestions for dog friendly places gratefully received.

ITEMS FOR SALE OR WANTED

WANT A DOG, NEED A DOG, SHOULD HAVE A DOG.

If you are looking for any kind of  pooch check out the site of Poorpaws in the Lot . Susan Glibbery works her socks off to rehome dogs in France and if you don't want a dog think of sending a donation to help with her work. Look on the 'dogs adopted section' of her site to cheer up your day and think YOU could have a part in this.
www.poorpaws.com   and the contact there is Susan Glibbery
Posted by bergerie at 16:03

TAGlines is for you to tell us, your friends and other interested readers about what's going on in the area; what is for sale or wanted; and the more readers we have the better the chance of getting the word out.
TAG( Taglines) est un blog mis à votre disposition pour que vous partagiez avec nous, les lecteurs de Tag, (qui sont principalement Anglais pour le moment et vivant dans le Midi-Pyrénnées,) ce qui se passe dans la région, ce qui se vend, ce qui est cherché, ce que vous faites et pensez.
NB some email services have strict spam/junk filters and TAGlines doesn't always get through, but you can add it to your "white list" and make sure it gets through.
If you want a closer view of the pictures, click to see a bigger image.

bergerie
I have had a life with books. Moving from Middlesbrough to Manchester Public Library then Bolton, where I ran a Branch Library. My interest has always been children's and illustrated classic literature so when I started my bookselling career, this is what I decided to specialise in.I think my background in Libraries and the knowledge I gained there set me on the path to becoming a very successful bookseller and I gained first membership of the PBFA [Provincial Booksellers Assoc.] and then a couple of years later was admitted to the prestigious ABA [Antiquarian Booksellers Assoc.] Having the courage to exhibit at Book Fairs in the USA made a huge difference. We moved to France in 2001 and have never regretted that decision

Theatre in English in Cordes

The Anglican Chaplaincy of Midi Pyrenees and Aude

Your picture could appear here and be seen by hundreds of readers per day.
No charge but it must be in a shape suitable for here and must feature the SW of France.
Click on the picture to view the artists website , if they have one.

Cherry blossom in the Tarn

A Traveller's Dream by Elly Wright

On the road, Africa by Resi van Eeten

When the boats come in by Rana J. Rodger

All words are pictures or "twindividual art"

by Milla and Mollis Schulze Elshoff

It's a tall order